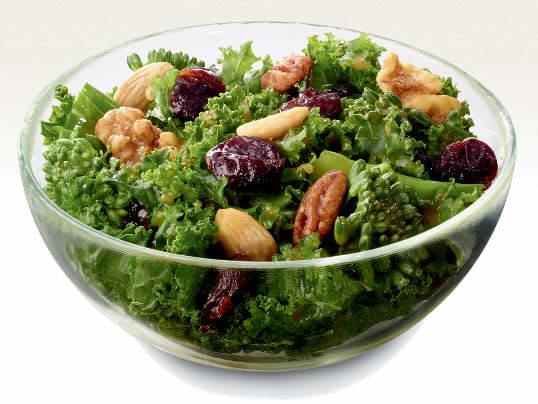 As a health enthusiast, it sometimes gets frustrating covering the fast food industry. I'm constantly writing about ridiculously unhealthy things, like bacon wrapped pizzas and sandwiches that use fried chicken patties as bread. Just writing about these nutritional disasters makes it feel like my arteries are clogging! But every once in awhile, a fast food restaurant does something amazing. Something that makes me feel like dancing. Something healthy. My friends, today is one of those days, because Chick-fil-A has just started selling a new product that I believe just might be the single healthiest thing you can buy at a fast food restaurant.

Healthy and Chick-fil-A might not seem like words that go well together. After all, Chick-fil-A is known for it's legendary battered chicken sandwich. It might be delicious, but health food it is not. Even so, in recent years Chick-fil-A has taken steps to provide healthier options. For example, Chick-fil-A is currently the only major fast food chain that offers grilled chicken nuggets.

Today, Chick-fil-A's menu took another step in a healthy direction by adding a new item to the menu: Kale. Yes, you read that correctly, Chick-fil-A now sells kale. The new Superfood Side is a salad made of chopped broccolini, kale, dried sour cherries and roasted nuts, all topped with a maple vinaigrette.

Here at FastFoodNutrition.org, we're used to fast food restaurants introducing products that sound like they should be healthy, but aren't. Like salads that somehow have more calories than a Big Mac. Is that the case with the Chick-fil-A Superfood Side? Or is it ACTUALLY healthy? I can happily report that yes, it is actually healthy! It's low calorie, low fat and contains no cholesterol. It also contains very little sodium, which is extremely rare for fast food.

But nutrition isn't just about what's not in your food, it's also about making sure you're eating lots of nutrients that are good for you too. Chick-fil-A's kale masterpiece delivers in this regard as well. The Superfood Side is loaded with vitamin A and C. In fact, a large serving of the Superfood Side contains 100% of the daily value of vitamin C.

In our estimation, the Chick-fil-A Superfood Side is the healthiest fast food menu item on the market. Hopefully other fast food restaurants will take notice and add similarly healthy items to their menus.

Follow the links below to see full nutrition facts for the Chick-fil-A Superfood Side:

How Restaurants are Responding to the COVID-19 Outbreak

Cage-Free Eggs Coming Soon to a Breakfast Burrito Near You