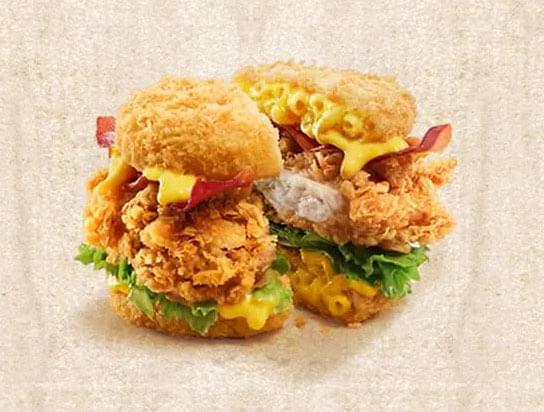 Years ago, KFC made waves by introducing a sandwich that used chicken instead of bread as the bun, the Double Down. Now the fried chicken restaurant chain is back at it with a creative bun replacement.

The new Mac 'n Cheese Zinger skips the bread in favor of a bun made from KFC's Macaroni and Cheese. To make the sandwich stable, the mac 'n cheese is formed into a bun-like shape, breaded and deep fried.

KFC hasn't released the nutrition facts for the Mac 'n Cheese Zinger yet, but it's safe to say that this is probably a calorie bomb and a half.

If you REALLY want to try the Mac 'n Cheese Zinger, you'll have to go to your nearest KFC... in Singapore, which is the only country it is available in. But may we suggest that you opt for a healthier and closer option instead?