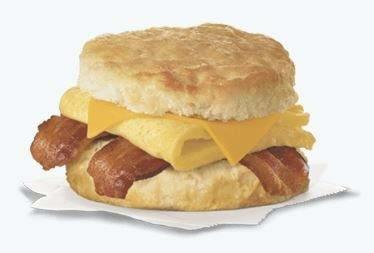 Everyone knows all about Chick-Fil-A's delicious chicken sandwiches, but did you know that their breakfast menu is equally tasty? Every Most mornings (Chick-Fil-A is closed on Sundays), Chick-Fil-A locations around the country are serving up hot breakfast favorites like the Egg White Grill and the Breakfast Scramble Burrito, but only during Chick-Fil-A's breakfast hours.

Does Chick-Fil-A Serve Breakfast All Day?

Chick-Fil-A fans will tell you that any time is a good time for Chick-Fil-A breakfast, but the restaurant chain sadly disagrees. Chick-Fil-A does not serve breakfast all day. If you want that Bacon, Egg & Cheese Biscuit, you had better get your self out of bed at a reasonable hour during Chick-Fil-A's Breakfast hours.

When does Chick-Fil-A start serving breakfast?

Chick-Fil-A's breakfast menu starts when the restaurant opens; bright and early at 6:30 am. That's great for the Chick-Fil-A fanatic who happens to be a morning person, but what about those who like to sleep in?

When Does Chick-Fil-A stop serving breakfast?

Chick-Fil-A stops serving breakfast at 10:30 am. We've heard occasional reports of people being able to order breakfast outside of Chick-Fil-A's breakfast hours, but don't count on that happening. If you want Chick-Fil-A breakfast, you had better get yourself up at the crack of 10:30 am! If you didn't wake up that early, don't worry... there's always tomorrow! Unless tomorrow is Sunday. In that case, you're screwed... until Monday.

Is the Popeyes Blackened Chicken Sandwich Healthier than the Original?