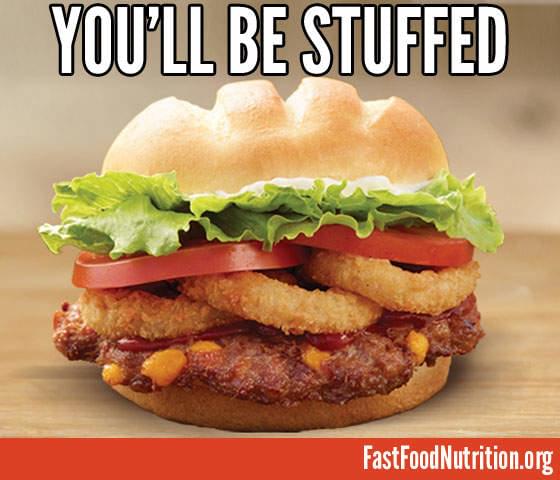 After last week's Turkey Burger announcement, did you think Burger King was turning over a new leaf and becoming more health-conscious? If you did, you'd be wrong. Just take a look at the burger pictured above. It's a large ground beef patty, topped with fried onion rings, lettuce, tomato and mayo. You might be thinking “I could probably eat that without dying.” Well don't get so cocky, because there's more to this burger than meat's the eye (pun intended).

That ground beef patty may look ordinary, but it's stuffed with bacon and cheddar cheese. That's right, there's bacon and cheese INSIDE this burger. Behold, the new Burger King Bacon Cheddar Stuffed Burger.

Now let's say you have an extremely strong heart and you're able to eat one of these Bacon Cheddar Stuffed Burgers without having more than a heart attack or two. You might be thinking, is there any stuffed side dish I can order to go with my stuffed burger? You bet. Burger King has also just announced their new Loaded Tater Tots, also stuffed with bacon and cheddar cheese.

So what kind of nutritional hit are you going to take from your stuffed burger and tater tots meal? Well let's pretend you're the health-conscious sort of cheddar and bacon stuffed food enthusiast, and you opted to get the smallest size of the Loaded Tater Tots (the 8 piece).

Your meal would consist of a whopping 1,030 calories. 550 of those calories would be coming from fat. And speaking of fat, you would consume 61 grams of it; 94% of your FDA recommended daily fat intake. You'd also be getting 90 mg of cholesterol, 2,060 mg of sodium and 87 grams of carbohydrates. Mmmm obesity never tasted so delicious.

In addition to the Bacon Cheddar Stuffed Burger and Loaded Tater Tots, Burger King also announced a few new non-bacon and cheese stuffed menu items Those items include a Pina Colada Smoothie, Donut Holes and a chipotle-style Whopper, chicken sandwich and chicken wrap. Follow the links below to get the full nutrition facts for all of Burger King's new offerings.