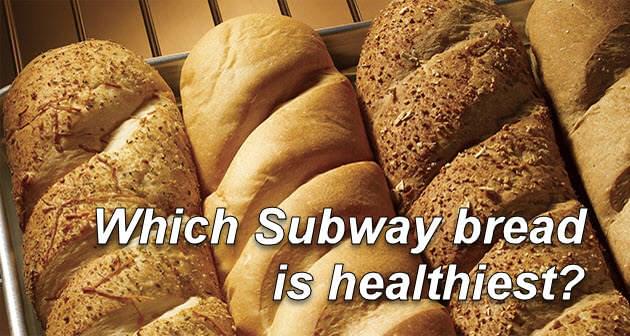 If we had to rank fast food restaurants by smell, Subway would be #1. Their fresh baked bread smells amazing! But with a dozen Subway bread choices to pick from, which one is the healthiest? It's probably not what you think.

Before we get into it, let's get one thing out of the way. If you're REALLY trying to eat as healthy as possible, you'll skip the bread and order a salad. You'll still get all the same meats and veggies you love from the sandwich menu, but they'll be chopped into bite sized pieces and served on a bed of lettuce or spinach.

But if a salad just won't hit the spot and you want a sandwich, choosing the right Subway bread isn't as easy as you might expect. Conventional wisdom would lead you to believe that the flatbread is going to have fewer calories than the traditional bread. Flatbread is thinner, so it's less bread, and that means fewer calories, right? Wrong. That's a myth we've dispelled before.

So what is the healthiest bread at Subway? It's a tie between the 9-Grain Wheat Bread and the Italian White Bread. A 6 inch serving of either of these breads contains 180 calories. That's 40 fewer calories than the flatbread or the Monterey Cheddar!

The moral of this story is that sometimes making healthy choices takes more than common sense. It takes actually looking up the nutrition facts! FastFoodNutrition.org is a mobile-friendly website, so you can check nutrition facts on your phone from anywhere; even while standing in line at Subway!

Without any further ado, here are all of the Subway bread choices listed in order of calories. Click on any bread to view the full nutrition facts.

*All calorie counts are for a 6 inch serving of bread.