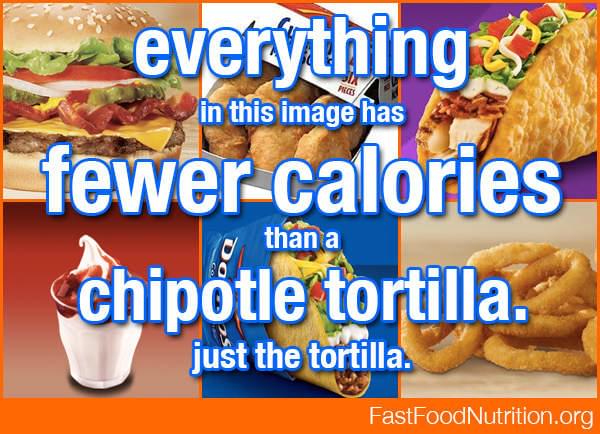 Next time you find yourself at Chipotle, think twice before ordering that burrito. You might not realize it, but that thin, flour tortilla actually packs a HUGE caloric punch. To illustrate just how many calories there are in a Chipotle tortilla, here's a list of fast food menu items that actually have fewer calories:

Just for the record, we aren't suggesting that Burger King's Onion Rings or McDonald's Chicken McNuggets are actually healthier than a Chipotle tortilla. There's a lot more to nutrition than simply counting calories. But the comparison between these items and the Chipotle tortilla shows just how shockingly high the calorie count is in these thin, flour, burrito-wrappers.

There are a staggering 300 calories in a Chipotle flour tortilla! To burn off those 300 calories, the average person would have to run for half an hour. The good news is that it's super easy to avoid this calorie nightmare without giving up Chipotle. Just order a burrito bowl!

Chipotle's burrito bowls contain all the same ingredients as a burrito, just without the tortilla. So it's up to you... either order the bowl, or be prepared to spend 30 minutes on the treadmill burning off the calories from the tortilla!