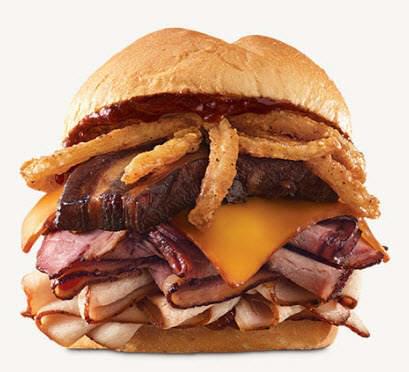 When Arby's says that they "have the meats", they aren't kidding. And they're out to prove it with the new Smoke Mountain Sandwich. What's in this sandwich? A better question would be what ISN'T in this sandwich.

From the Arby's Employee Handbook:


How to make a Smoke Mountain Sandwich
Step 1: Take everything we have.
Step 2: Put it on a bun.

*Editor's note: I may have made this up, but it can't be too far from the truth

The Smoke Mountain Sandwich is a towering pile of pork belly, smoked brisket, and smoked mesquite turkey breast. That right there would be more than enough for most restaurants, but not Arby's. In addition to that mountain of meat, you'll find crispy onion strings, cheddar cheese and barbecue sauce.

If the Smoke Mountain Sandwich has your mouth watering, you'd better run to Arby's and get one before it's gone, because this is a limited time offering. But make sure you enjoy that run, because after eating a Smoke Mountain, it'll probably be a while before you feel like running, or even moving, again.

Is Brown Rice Healthier Than White?