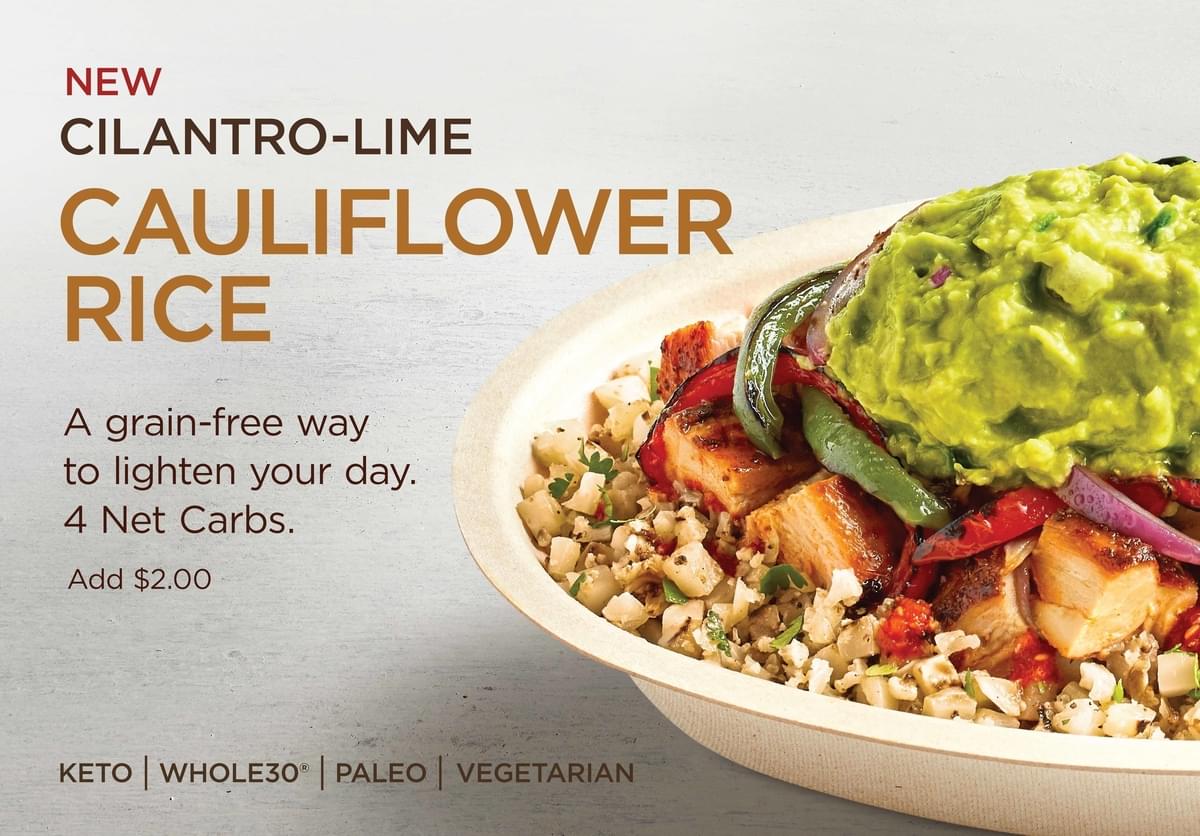 Since Chipotle's inception, customers have been faced with the a simple question while ordering their burritos: white or brown rice? That question is about to get slightly more complicated, as Chipotle is now testing a new Cilantro Lime Cauliflower Rice option in select markets.

On July 15, 2020, Chipotle will begin serving the new Cilantro Lime Cauliflower Rice at 55 restaurants in the Denver metro area and in Wisconsin. Presumably if customers flock to the new offering, Chipotle will roll out the Cauliflower rice nationwide.

What is Cauliflower Rice?

Cauliflower rice isn't actually rice at all. It is simply pieces of cauliflower that are either chopped or pressed into tiny pieces about the size of a grain of rice. Home cooks usually make cauliflower rice by either chopping it in a food processor or by pressing it in a potato ricer and then cooking it on the stove with a small amount of oil. The end result is a vegetable that looks an awful lot like rice. Chipotle is making their cauliflower rice slightly differently by grilling the cauliflower and then seasoning it with lime and cilantro (this is also how they season their brown and white rice).

There are several reasons to choose cauliflower rice over regular white or brown rice. Chipotle has yet to release the nutrition facts for their Cilantro Lime Cauliflower Rice, but in general, cauliflower rice contains significantly fewer calories and carbohydrates than traditional rice. For people following a low calorie or low carb diet (like the Keto diet), limiting calories and carbs can be very important.

Choosing the Cauliflower rice in your Chipotle Burrito can also be a great way of sneaking more vegetables into your diet, which is something most of us could use. According to the CDC, 9 out of 10 Americans fail to eat enough fruit and vegetables.

Are there reasons to choose rice over cauliflower rice?

Even though there can be health benefits of choosing cauliflower rice over white or brown rice, there also are reasons you might opt to stick with traditional rice. Rice is a great source of complex carbohydrates, which are essential in any diet. If you need extra carbs and calories in your diet to fuel your athletic endeavors, choosing rice over the cauliflower rice at Chipotle might make a lot of sense. At the end of the day, Chipotle's rice and cauliflower rice are both healthy options. The one you should choose will depend on your specific nutrition needs.

Who can eat Chipotle's Cauliflower Rice?

The Cilantro Lime Cauliflower Rice at Chipotle should be a viable option for just about any person on any diet. The Chipotle Cauliflower Rice is Vegetarian, Vegan, grain-free, low-carb and fits well into the Keto and Whole90 diets.