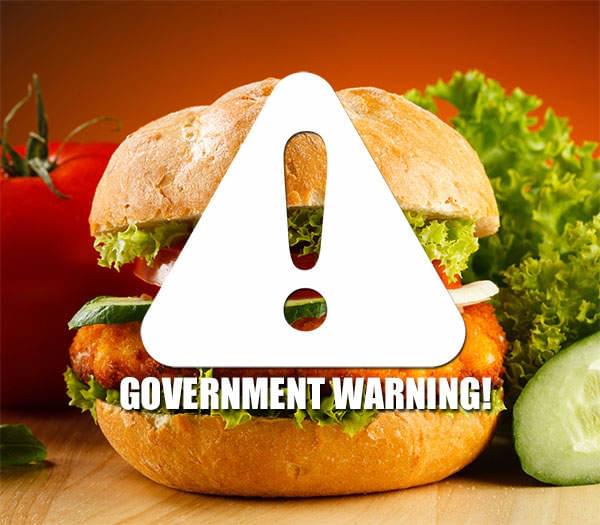 Whether it's drinking alcohol while operating heavy machinery, smoking while pregnant or removing that tag on your mattress, the government likes to slap warnings on products to keep us from doing dangerous things. And pretty soon, you might find a government warning on yet another product: your fast food meal.

Starting today, New York City will require that restaurants label high-sodium foods with a health warning. You'd be forgiven for thinking that salt doesn't warrant a warning, as it doesn't seem nearly as dangerous as alcohol or tobacco, but once you look at the numbers you might change your mind.

Heart disease is the largest cause of death in America. In fact, heart disease kills almost 2x as many Americans each year as smoking does. And what's a major risk factor for heart disease? Excessive salt consumption, which sadly, has become the norm in the American diet. In fact, the average American now consumes 3,400 mg of salt per day. That's almost 50% more than the maximum amount recommended by the USDA!

In an effort to reverse this trend, the New York City Council has passed a law requiring that high-sodium items be labeled on the menu with a salt shaker icon. This icon will be required to appear next to any menu item that contains more than 2,300 mg of sodium, the daily recommended amount.

It's important to remember that the absence of the salt warning does not mean a particular menu item contains an acceptable level of sodium. If you eat three equally portioned meals a day, you'd want to get about 770 mg of sodium in each meal (even less if you're snacking too!). That's a whole lot lower than the 2,300 mg threshold for the salt warning.

So how many fast food items will be affected by this law? The list is shockingly long. We found over 120 menu items that will be required to display the salt warning. One of the biggest offenders is a bowl of chili from Dairy Queen. With 3,900 mg of sodium, this chili packs more sodium than a 40 piece order of Chicken McNuggets from McDonalds!

While this law only affects restaurants in New York City, it isn't unreasonable to think that a similar law could be adopted by other cities, states or even the federal government. In fact, back in 1996, New York City began requiring that restaurants post calorie counts on menus. The success of that law led to a similar nation-wide FDA regulation in 2014.

At FastFoodNutrition.org, we think this law is a great idea. We are firm believers that consumers have a right to know what's in the food they're eating. This law will help consumers make choices that are right for their diet, without limiting their freedom of choice. If you really want that Dairy Queen Chili, you can still get it... but you'll get it knowing a bit more about how much salt is in it.